Yesterday was a magical day for me.  I feel like a junkie who has to get his daily fix and my fix is photographing rare or showy wildflowers.  Or better yet, rare AND showy!  But like an addict, my tolerance is increasing, leading me to seek out more and more exhilarating finds.  However, I am a responsible botanist, so I know when to lay off and take a break from my plant excursions.  Which gives me a chance to write about them.
I've encountered yellow lady slipper orchid plants (Cypripedium parviflorum var. pubescens) only 3 times in my extensive surveys across southern Illinois from 2008 to the present, and never in flower.  Renowned IDNR botanist John Schwegman told me he no longer knows where any yellow lady slipper orchids grow in the wild in southern Illinois.  Although these were once considered the most common orchid in North America, its distribution in Illinois seems to be decreasing, mostly due to habitat loss and poaching. On a survey in a remote area of Crab Orchard Wildlife Refuge in Williamson County in 2011, I encountered a patch of yellow lady slipper orchids, but since it was late summer, they were not in flower.  I have sought to photograph them in flower at this location ever since.  I’ve tried 3 times in the past 3 years and I’ve always been too early or too late.  This year was to be the year!
I planned to stop and search for the orchids on my way north out of town.  Due to circumstances beyond my control, it was late in the afternoon before I made it to the Visitor’s Center at Crab Orchard Wildlife Refuge.  I asked for a gate key, but they had all been given out for the day.  Since I know the staff there, one offered up his key, but warned me that the shooting range at the nearby prison was active that day, and visitors were not recommended.  I mentioned that this was the only day I could go and check on the orchids, and that it was of upmost importance.  He said it was up to me so of course I went!
I headed into the woods to search for the orchids and although I knew where they were, it took me longer to get to the spot then I remembered.  The day was getting late and I had to return with the key before the office closed and I was dripping blood from my ear because I ripped it open on a multiflora rose bush in my haste to get to the orchid spot, but at last I came upon the wonderful sight of the incredible beauty of the flowering yellow lady slipper orchids!

Other states can boast all they want about how easy it is to find this species, but in Illinois they are hard to find so I find immense joy in knowing this secret spot deep in the woods on a rich north-facing slope loaded with Goldenseal (Hydrastis canadensis), Broad Beech Fern (Phegopteris hexagonoptera), Ginseng (Panax quinquefolia), Bellwort (Uvularia grandiflora), Maidenhair Fern (Adiantum pedatum), and Puttyroot Orchid (Aplectrum hyemale).  I made a genuine and thorough mediation of appreciation at the location and made my way back for the long drive up north. 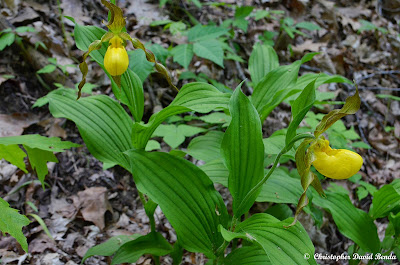