Today was another glorious day of hiking across beautiful southern Illinois!  It was my wife's birthday so she took off work to join me on the trail.  Another person I know who lives nearby to the trailhead of the section I would be hiking today decided to join us as well.  And Ruby dog was good as new, back on the trail and loving it.  It was fun to have some company on the trail.  We left a car where the trail comes out on Waterplant Road (Cedar Street) in Alto Pass and on our way to the beginning of section of trail we planned to hike today we stopped at Cliff View Park along Skyline Drive to take in the views.
We started at the Lirley Trailhead this morning, which is just a few miles south of my house in Makanda.  The previous day I was hoping to hike all the way to Old US Highway 51, but I ran out of daylight and finished at the Makanda Inn & Cottages instead.  This meant I would have to skip a little bit of trail between Shepherd Lane and Highway 51 since it didn't make sense to start with that little section in between two sections of road walking this morning.  I skipped some road walking in several others places along the route, but wanted to make sure I hiked all the sections of trail.  Skipping this little section would bother me all day.

I didn't stop to take many photos because I was talking to my trail companions, but the trail starts in a powerline cut and shortly enters the woods.  The trail down to the first creek crossing was nice singletrack and I saw more Puttyroot Orchid (Aplectrum hyemale) leaves that had one fruiting stalk from last spring remaining in the middle of it.

Orchids produce capsules, with thousands of tiny seeds inside.  The capsule splits open once ripe and the tiny, dust-like seeds are easily scattered far and wide with the wind.  However, this great seed dispersal strategy comes at a cost.  The tiny seeds have little to no endosperm.  This is the stored energy the plant will need at the beginning stages of growth until it can photosynthesize on its own.  It's not much energy so the orchid seed is reliant on mycorhizal soil fungi to feed it nutrients.  A small seed landing in an area with the necessary soil fungi is the limiting factor and that is one reason why orchids are fairly rare.  This also means that orchids do not transplant well and should never be dug up from the wild.  All that being said, the Puttyroot Orchid is fairly common in the woods of southern Illinois and I saw some leaves on every day of my 10-day hike.

There is some major soil erosion on the trail in this area as well as invasive species infestations.  I focused on the conversation instead of the Japanese Stiltgrass (Microstegium vimineum) and Autumn Olive (Elaeagnus umbellata).  We passed through some pine stands and hiked non-stop to the rocky section of trail that divides Cedar Lake from Little Cedar Lake to the south.  This is a sweet spot.
Although the sun was shining, it was a little windy and the air was cold.  So we sat at one of the campsites in this area that offered a little protection and ate lunch.  After lunch our companion took the trail back the way we came, while my wife and I continued to to Alto Pass.

After crossing the spillway between the two lakes, the trail goes up a hill and parallels the lake, but winds around a couple small ravine valleys that have nice oak trees among the sandstone exposures.   I've heard the former valley of what is now Cedar Lake was an awesome canyon before it was flooded to create the lake in the 1970s and I'm glad at least there is a little bit of sandstone outcrops that remain visible on the hills above the water line.

I found a couple neat plants down by the water's edge.  There was this large floating object the size of a softball, but it looked like a brain.  This is the conglomerate fruit (a compound drupe) of Osage Orange (Maclura pomifera).  The tree co-evolved with Woolly Mammoths and since those are now extinct, it's considered an evolutionary anachronism.  This species was widely planted by Native Americans across the Midwest.

Another plant that is an evolutionary anachronism is Honey Locust (Gledtisia triacanthos).  It's a legume that produces large seed pods that were eaten and dispersed by Woolly Mammoths.  These animals would also rub against the tree and damage the bark so it evolved thorns to protect itself.  Most armature produced by plants are called thorns when in fact, most are technically prickles.  Roses have prickles, so do blackberries, greenbriars, and many others.  Prickles are an outgrowth of epidermis so they can be easily broken off the stem.  Thorns are modified branches and cannot be easily broken off.

The water at the lake's edge was slightly frozen in places and I noticed a plant floating at the surface of the water, but under the ice.  It is appropriately named Pondweed (Potamogeton sp.) and is an aquatic plant.

One of the best things about hiking in the winter is that one can see through the forest.  And in many places along this trail that means seeing outcrops of sandstone.  Often these exist in higher quality sections of forest that contains a good assemblage of oak species of various size classes.

Another thing that pops out when looking through the woods this time of year are the trees, typically in the understory, that still have brown leaves.  The term for this is marcescence and there are a few trees that exhibit this, but most commonly it's American Beech (Fagus grandifolia) that's holding its leaves while most other species have dropped theirs as part of their winter dormancy.  A prevailing theory for marscence is to deter herbivory.  Mammals like deer are less likely to eat the tender leaf buds on young twigs with dry, crunchy, brown leaves on the twigs, plus mature trees that have leaves primarily in the canopy do not typically retain them in the winter; they don't need to because animals can't reach them.

The Shawnee National Forest is very fragmented so it is a matrix of public and private land and this can make it tough to find ways in and out of certain tracts of land.  The trail in these areas often follows an old forest service road that cuts across private land, but is a public right-of-way.  These sections are often rutted out, muddy, and full of invasive species, but like I said before it still beats road walking.  We followed a field and barbed wire fence on an old forest service road and soon were at our car.

We drove into nearly Cobden to get some gas and decided to go to Fuzzy's, the local tavern, for a beer for my wife's birthday.  It was a nice treat at the end of our hike.  Then I realized there was still enough daylight left in the day for me to hike the short section of trail I missed the day before.  We drove back to the Lirley Trailhead to get our other car, moved it to the crossing of Highway 51 and Old Highway 51 near the smiley face water tower, and then my wife dropped me off at Shepherd Lane.  I walked down the road and into the woods and completed the short 2-mile section of trail.  That would help me sleep that night, knowing that I didn't miss hiking any sections of trail hiking.  I hiked back to my car and went home. 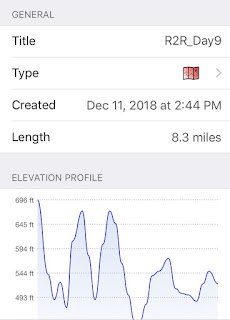 Posted by Illinois Botanizer at 11:05 PM