This section of the River to River trail is probably the best of the entire trail as it passes through some beautiful country.  I hiked for 8 hours and saw no people and no moving cars, not even at High Knob, High Knob Campground, or the most popular site in all of the Shawnee National Forest, the Garden of the Gods.  It was a cold, dreary December day, but I enjoyed every second of it.

To start off, the canine friend that joined my dog Ruby and I, whom I named "River," went outside this morning and wandered off and did not come back.  I was really thinking this dude was going to follow me all the way to the Mississippi River.  Well, I enjoyed his company for a day and I sure hope he knows what he is doing.  I mean, I gave him a bath, dinner and breakfast, a warm, soft place to sleep, and lots of love.  But the dog can live by his prerogative, as I will mine.

The plan for Day 2 on the R2R trail was to hike from my lodging at Rim Rock's Dogwood Cabins to Herod.  Again, the cabins' owner Steve Melville kindly followed me to the Herod Post Office, where I dropped off my car, and gave me a ride to the trailhead on Sparks Hill Road.  This is actually part of the former R2R trail from Battery Rock, but soon I would join up with the current official R2R trail. 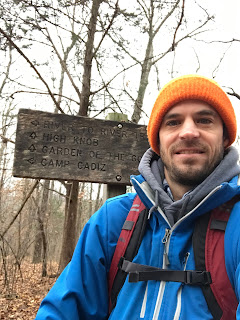 The hike was amazing!  I think the best section of trail is from High Knob to the trailhead on Gape Hollow Road (I actually know of a secret side canyon that is a better place to finish, but I'll save that for another day).  I have to say though, I was very sore from my 18-mile hike the day before.  Less than halfway in my knees and hip began to ache, but as long as I was able to move my legs I was determined to push onward.  I stopped at High Knob and ate lunch, which included a couple swigs of whiskey and that helped soothe my aching bones a little.


The trail from Sparks Hill Road up to High Knob was fine, in the woods, and not along any paved roads.  But from High Knob on, the trail was spectacular!  From the summit of High Knob, I descended down an old hiking trail, which loops around the bluffs, and when the trail turned north, I continued cross country west back to the R2R trail. 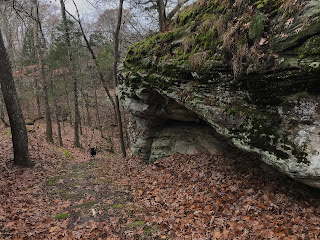 The next feature is the privately owned horse camp at High Knob.  Surprisingly, no one was around and as I mentioned, I did not see a person or moving vehicle.  The store had a sign that said be back later.  I didn't mind, I was going to stop in a just say hello, and didn't need anything.  Another great thing about hiking in December.  You have the trail all to your own.

There are a surprising amount of plants that can still be identified in winter.  Of course, woody plants are able to be known based on twig characteristics, but other herbaceous plants are still green.  Smilax glauca is common along the trail, as well as the winter photosynthesizing orchids like Tipularia discolor.  On the cliffs, Asplenium pinnatifidum and Arabis laevigata were seen, and Polystichum acrosticoides was common, especially in the pine plantations.


Old homestead sites were also seen along this section and other signs of previous inhabitants were evident, such as Yucca.  The hills of southern Illinois were settled earlier than the rest of Illinois for several reasons and daffodils and Yucca are a sure sign of such settlements.

Before long I was at Buzzard's Point.  I had previously explored this area and had a long way to go so I did not take the loop trail up into the sandstone cliffs and instead stayed along the R2R and traversed below the bluffs.  One could spend a whole day just exploring this area.

After enjoying this area, I soon crossed a paved road and entered the Garden of the Gods Wilderness Area.  I had not been on this section of trail in between the paved road and the observation area so it was a delight to see.  However, this is where the trail began to get muddy.  Ideally, horse traffic would be ceased when the trails are wet because their hooves rut up the trail and make a muddy mess.  But like the dog I named "River," people are going to live according to their prerogatives and we have to learn to share the resource.

After viewing the extremely scenic cliffs along the R2R trail north of the Garden of the Gods entrance road, I came to the crossing with the entrance road.  I have been to the Garden of the Gods a hundred times so I debated about hiking up to the observation area.  I decided it was worth it because I had a feeling no one else would be there and my instincts were right.  I had the place all to myself.


I have been to this area enough that this was not the first time I have visited this site without people, but each time having this magical area to oneself is priceless.  It was so silent and the view so expansive that I sat for awhile and took it all in.  Had I not been from this area or seen this place yet for myself, I would have been blown away.  However, the grandeur of the expansive views and unique rock formations leave every visitor feeling like they have seen the place for the first time,  It never gets old. 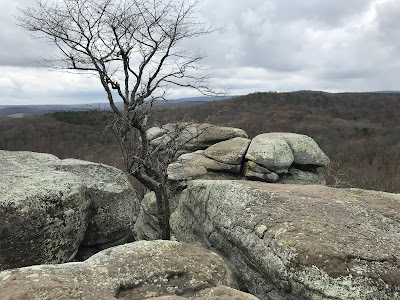 I left the observation area about 2pm and headed for Herod.  There was still a bit of trail yet to cover, but I have been through this area so many times that I was not worried about the time, even though my knees were very sore.  One foot after another, again and again, but my botanical mind can not be turned off and I continued to appease myself by looking at the landscape.

The best campsites occur on the last ridge before descending into Herod.  There are 3 along this stretch and the best one is the one in the middle.  When I lead Road Scholars tours out of Camp Ondessonk, this is where we have lunch.  The view is incredible.


This is where the snow started to pick up.  Sleet had fallen several times throughout the day and by this time it turned into big, fluffy snowflakes.  I didn't mind though, in fact I was glad it was frozen water rather than rain because I didn't get too wet.  My boots might have another opinion though, LOL!

It was an extremely rugged and extremely scenic day on the R2R trail though and I fully relished in the fact that I am able to hike this awesome trail in an awesome area.  I hiked about 14 miles from Karber's Ridge Road to Herod.

Posted by Illinois Botanizer at 9:43 PM