Today's trail miles were hard fought.  I woke up with very sore legs and tried to walk it off.  My dog Ruby also seemed stiff, but I saw her run around in the yard and figured she would be ok.  I couldn't stand the idea of hiking through the Lusk Creek Wilderness without my trail buddy!  After all, she was running on 75% (3 out of 4 legs), but I was only at 50% (1 out of 2 legs).

I was a bit nervous for today's hike because I would be travelling difficult terrain in a very remote area.  Ruby and I were both hurting and there would be no options for stopping short of our goal.  I left War Bluff Wildlife Sanctuary this morning and had my friend follow me to the south trailhead on New Home Road, on the west side of the wilderness area, where I left my car.  He gave us a ride to the trailhead at Bethesda Church and we hit the trail about 10:30am, later than I hoped, but it took awhile to move my car and I stayed up late hanging out with my friend!  Before long I was into the wild woods.

The trail was difficult to see in places because of all the downed leaves, but the leaves actually helped cover up the muddy trail and the singletrack sections through the hardwood forest were the best parts.  As I hiked I thought about how areas that now seem remote were once not so remote, when those areas were settled by pioneers in the mid-1800s.  The church seemed like it was in the middle of nowhere, but I imagine at one time many more people lived in this area. 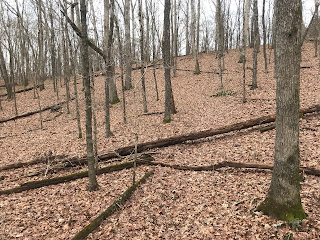 As I mentioned in my earlier blog, southern Illinois was settled before the northern and central parts of the state.  There are a few reasons for this.  Pioneers were comfortable living in the forests, they came from the east where deciduous hardwood forests were the main plant community type and provided them with construction materials and ample game to hunt.  But perhaps the main reason was because of farming.  We now know that the rich black silt loam prairie is the most productive farmland.  But the ground is composed of thousands of year of decaying roots of perennial plants.  Many people don't realize that at least 75% of a perennial prairie plant is underground.  It's mostly roots!  And these roots are so tightly packed that it was very difficult to plow.  It was much easier to clear the forest of trees, build a cabin, and farm the soft forest soil.  However, this land is not as rich as the prairie soil and that combined with poor agricultural practices led to erosion and depletion of the soil.  At this point, settlers would pack up and move on to richer ground, leaving behind a wasteland.  This is one reason why the Shawnee National Forest was created, so the federal government could rehabilitate the land.  One way this was done was by planting pine trees and this is why there are so many pine plantations in the Shawnee National Forest.  The pine stands are my least favorite areas to hike through.

Anyway, the trail from trailhead to Little Lusk Creek was awesome, a winding trail of singletrack through the oak-hickory forest.  When I came to the creek crossing, it was like many others I had previously encountered; moderately challenging.  The water was high at the actual crossing, but nearby it was shallower.  Waterproof boots and gaiters helped keep me dry.  There was some decent beachfront real estate here.

Along the creek, I noticed a reed-like plant that was still green.  This is Giant Cane (Arundinaria gigantea) and it's the only native species of woody grasses in Illinois.  It is related to the invasive and terrible plant Bamboo that people have spread around the state.  But this one has a neat story.  Post Illinoian glaciation, around 150,000 years ago, glacial meltwaters filled up the valleys of extreme southern Illinois, an area that has never been covered by glaciers, and carried seeds of this plant on the surface.  The seeds were all deposited at roughly 440 feet, the maximum height of the glacial lakes.  So when the waters retreated, Giant Cane grew up at this elevation.  I looked at my Topo Maps app, I was at 487 feet.  Pretty close.

I was limping pretty badly for the most of the day, but I was anxious about the hike so I wanted to make some miles.  Despite my poor condition, I managed to walk 3.2 miles in the first hour and was at 9 miles after 3 hours.  Not a bad pace at all considering.  The trail followed the creek for a stretch and was very scenic.  I noticed a large patch of another green plant.  This is a spring wildflower and it looks like a species of Waterleaf, and indeed is in that family, but instead is the closely related Fern-leaved Phacelia (Phacelia bipinnatifida).  This will bloom in April with pretty purple flowers.  I also noticed some fresh beaver activity and saw one tree about to fall over with a R2R Trail marker on it, D'oh!

The trail left the scenic canyon and went up to higher ground.  This section was a long haul, with little for interesting things to look at.  But I did find this interesting looking Tulip Tree (Liriodendron tulipifera).  Later I noticed it is marked on the map as the Tuning Fork Tree.


Shortly after this spot is where I got a little confused about the trail.  I thought I needed to continue west and came to this intersection and was thrown off by the sign tied up to a tree.  It said Owl Bluff was straight (west) and Secret Canyon was right (north), which was where the R2R trail marker was.  I looked at the map and noticed the trail goes north in this section so I trusted the markers and went that way.

Then I came to a sign on a Pine tree that said trail closed.  A trail led off to the northeast (not the direction I wanted to go) and the trail I was on went a little farther and then faded out.  I turned around and went back to the last marker and noticed there was one turned sideways, indicating a turn, but the trail looked like it was going back in the direction I just came from.  I looked at the map and noticed that the trail should do an about face and turn back south-southwest.  That was a weird intersection, but I figured it out.  In the wilderness areas the trail blazes (markers) are wooden, but still easy to see.  The other ones on the trail are white and blue.  The trail seemed to endlessly meander through the woods, changing direction often.  Long sections had no trail markers and I began to think "where in the blazes are the blazes!"  I knew in general where I was going, but wanted to stay on the official River to River Trail as much as possible.  Soon I was at Owl Bluff.

I saw the sign for the Owl Bluff horse tie-up, but so some reason thought the trail to the overlook was an auxillary spot and not the actual bluff.  I had been here before and I erred in thinking that Owl Bluff overlook was right along the trail so I pressed on.  After the trail left the cliffs, I realized I missed it and was not going to go back.

Owl Bluff is so named because of the rare plants known in the area and they needed to name the spot.  I heard Max Hutchison named it, after finding Appalachian Bugbane (Cimicifuga rubifolia) there.  He either saw some owls there or owl pellets.  Seems like a simple explanation.  Either way, this is an area that was so badly damaged by horse traffic that it led to the exclusion of horses within the natural areas of the Shawnee National Forest.  Rare plants here and other places like Jackson Hollow were being destroyed by irresponsible equestrian use.  Contentious lawsuits ensued, but eventually the court battle was settled.  Horses would be excluded from natural areas, but they needed to be well marked so that they could be avoided.

On my way down the hill into the canyon after passing by Owl Bluff, I noticed a beer can along the side of the trail.  It was unopened and ice cold!  My trail angels were clearly looking after me.  I put it in my backpack and continued down the hill.

The crossing at Lusk Creek wasn't too bad and once on the other side I cracked open the beer and made a video.  It tasted good!  I also took some time to photograph the alder bushes (Alnus serrulata) that grow here.  This shrub is not very common in southern Illinois and can easily be identified in the winter by the stalked leaf buds that look like boxing gloves.  Those delay caused me to loose my 3 mile an hour pace, but at this point I slowed down anyway because I knew I was nearing the end.  All I had to do was hike up and out of the canyon.

The forest was in good condition and it was a pleasant hike out of the wilderness area.  I made it up to the north trailhead on New Hope Road after a little more than 4 hours, at 11.5 miles.  I had a little farther to go, but those miles were easier.  The trail actually followed close to Highway 145 and I saw a few cars drive by.  But otherwise this was the 4th day without seeing any people.  I had the wilderness area all to myself, a truly wild experience.  I think Ruby thought the same.

I stopped along the trail to look at a couple more green plants that are among my favorites.  Puttyroot Orchid (Aplectrum hyemale) is another winter photosynthesizing orchid so the leaves are produced in the late fall and persist throughout the winter.  It is a common plant in the woods of southern Illinois.  The leaves are easy to spot in the wintertime, but come May, if you try looking for flowers you will find out that they can be tough to spot!

Another green plant I noticed that I favor is St. Andrew's Cross (Ascyrum multicaule).  This is related to the common plant called St. Johnswort (Hypericum spp.), but instead of having 5 yellow flower petals, it only has 4, hence the name.


Soon I saw my car, which was great because it started to rain.  I went to the Eddyville gas station and bought some wet dog food to give to Ruby and drove back to War Bluff Wildlife Sanctuary and took a nap.  I traveled 12.9 miles in just under 5 hours.

Posted by Illinois Botanizer at 10:55 PM